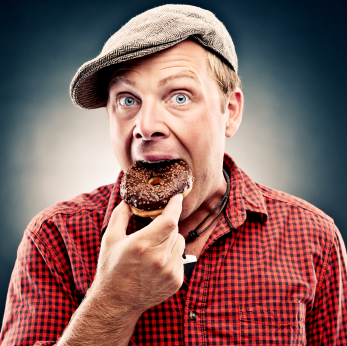 Think Before Reaching for That Doughnut. Excess Sugar Deadlier Than Fat.

Sugar in its many forms is in most of our foods and in excess leads to a variety of health risks and complications.
You are what you eat. Cliché but true, as the venerable publication Nature published their findings on the global consumption of sugar which creates a cascading effect of chronic diseases that are at epidemic levels around the world.

The causative effects of ill health from diet are more the fault of excess sugar in the diet than simply carrying extra weight.

Nature researcher Lustig and his co-authors – public health experts Laura Schmidt and Claire Brindis – say that their studies show 20 percent of obese people have normal metabolism and no ill health effects resulting from their weight, while 40 percent of normal-weight people have metabolic problems that can lead to diabetes and heart disease. They contend that sugar consumption is the cause.

Excessive sugar alters people’s biochemistry, making them more vulnerable to metabolic conditions that lead to illness, while at the same time causing you to crave even more sweets.

“The gestalt shift is maybe obesity is just a marker for the rise in chronic disease worldwide, and in fact metabolic syndrome, caused by excessive sugar consumption, is the real culprit,” said Schmidt, a health policy professor who focuses on alcohol and addiction research.

Dr. Carson Liu, a renowned Bariatric surgeon in Los Angeles, told Monsters and Critics (Link: Alec Baldwin sheds 30 pounds; Top bariatric surgeon weighs in on benefits) that a diagnosis of pre diabetes is a wakeup call for most people to lose weight.

According to Dr. Liu, “Early stages of pre diabetes or diabetes is completely reversible with diet and exercise. Most people with adult onset diabetes who understand the consequences will know of a relative with diabetes and its devastating consequences.”

Did you know that Americans eat and drink roughly 22 teaspoons of sugar every day – triple what they consumed three decades ago – and most people aren’t even aware of the various ways sugars sneak into their diets.

The killer carbohydrates are processed refined breads and cereals and other processed foods. The devil is in the terminology of sugar: High Fructose corn syrup, sucrose, glucose, fructose, maltose, hydrolyzed starch and invert sugar, corn syrup and honey.

The removal of those sugars out of the American food culture is going to require a massive shift in how foods and beverages are made in the United States.

The Nature researchers contend that the Food and Drug Administration needs to remove sugar from the list of foods “generally regarded as safe,” meaning they can be used in unlimited quantities.

SignatureMD concierge doctors understand the toxicity of sugar in diet, and how to counsel those looking to change their eating habits.

And just like alcohol and tobacco, sugar is an addictive substance that should be highly regulated, according to many doctors and scientists.

The news of sugar toxicity links to the ongoing problem of obesity, which is now thought to be infectious.

In addition to the sugar report, Nature also published findings that mice engineered to have a particular immune deficiency developed fatty liver disease and got fatter when fed a Western-style diet.

The twist? The immune-deficient mice were put in the same cage as healthy mice, the healthy mice started to come down with symptoms of liver disease, and they got fat.

Nature researchers believe the microbes in the stomachs of the mice as “bad,” disease-associated bacteria increased 1,000-fold in mice with immune problems. The fat mice literally gave the healthy skinny mice their bad microbes, making them fat.

“We could make a mouse fatter just by putting it in the same cage as the other mouse,” Nature reports.

Scary implications, but the good news is unlike mice that eat other mice’s feces, humans do not eat each other’s waste. The researchers believe this might be the way the mice are “catching” the obesity predilection.

“This is a very thought-provoking study that underlines the role of the bugs that we all carry inside us in determining our susceptibility to liver disease and its complications,” said Dr. Jasmohan Bajaj, an associate professor of gastroenterology, hepatology and nutrition at Virginia Commonwealth University, who was not involved in the Nature study.