Dr. Blakeburn has partnered with SignatureMD to ensure that you receive the finest in personalized care. As a program member, you’ll experience a new approach, where Dr. Blakeburn will dedicate the time you need to help you live your healthiest life.

Robert V. Blakeburn, MD completed his undergraduate studies at the University of Oklahoma in 1984. He went on to graduate from the University of Oklahoma College of Medicine in 1987. In 1990, he completed his Family Practice Residency while on active duty at Carswell Air Force Base in Ft. Worth, TX. Upon completion of his residency, and while serving as Chief Resident, he achieved Board Certification in Family Medicine. From 1990 to 1993, Dr. Blakeburn worked as both an active duty physician at Vance Air Force Base in Enid, OK, and an ER physician at Bass Baptist Hospital. While serving in the Air Force, Dr. Blakeburn received the Meritorious Service Medal and attained the rank of Major.

In 1993, Dr. Blakeburn co-founded the Enid Clinic, during this time he also worked as the clinic president. In 2001 he moved to Clinton to become the first full time ER physician at Integris Clinton Regional Hospital and the Medical Director of the Jim Thorpe Rehabilitation Unit. He was recognized by the Oklahoma Foundation of Medical Quality as one of six physicians in the state to be chosen as Champions of Quality. In 2007, Dr. Blakeburn returned to his roots and first love and again established a private practice specializing in family and holistic medicine. He continues to be the director of the Jim Thorpe Rehabilitation Unit, ER Director, Department of Medicine chairman, and past Chief of Staff of the Integris Clinton Regional Hospital.

Dr. Blakeburn is married to the former Kristin King of Clinton. Together they are very proud of their triplet boys, Christopher, Jason, and Matthew, and their daughter, Chelsea.

Dr. Blakeburn actively supports his community. He was the Scoutmaster of local Boy Scout Troop 361 and is an Eagle Scout. He is an ardent supporter and participant of the Western Oklahoma Ballet Theatre and Southwest Playhouse. He is currently the Lay Leader at the First United Methodist Church and has been known to fill the pulpit on occasion. Dr. Blakeburn is a board member and participating physician at the Clinton Free Medical Clinic. He is also a long time board member of Vine Life Ministries in Oklahoma City.

For 20 years, Dr. Blakeburn has been practicing Family Medicine in Western Oklahoma. He has an established reputation as being one of the top Family Medicine Specialists in the area.

His areas of interest and expertise include all facets of adult and pediatric medicine including wellness, heart disease, hypertension, cholesterol management, allergies, and diabetes. As many of his patients are aware, he is proficient in integrative medicine, and has incorporated this into his everyday practice. Dr. Blakeburn has also incorporated various cosmetic treatments (i.e. Botox, Juvederm, pulse light therapy) into his practice, and offers expertise and advice regarding weight loss, diabetes management, allergies and immunotherapy, and anti-aging medicine. Dr. Blakeburn is dedicated to caring for the whole person and building relationships with his patients. 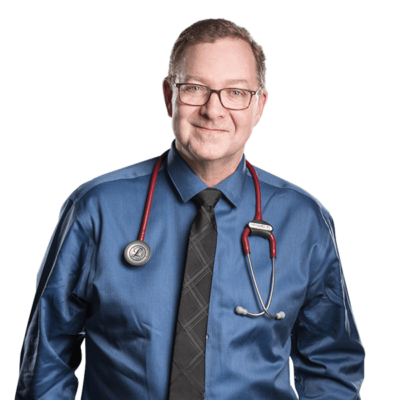 First doctor I have ever had that truly listens to what is wrong. He really cares about his patients and don’t stop… read more

This man and his staff are not just my care givers they are my family!!!!

I cannot say enough good things about Dr. Blakeburn (and his staff). Becoming one of his patients was the BEST decision… read more