Dr. Dacus has partnered with SignatureMD to ensure that you receive the finest in personalized care. As a program member, you’ll experience a new approach, where Dr. Dacus will dedicate the time you need to help you live your healthiest life.

James D. Dacus, MD  is an internist who also specializes in cardiology. He has been practicing medicine in Salinas, CA since 1985. He was appointed Chief of Staff for Salinas Valley Memorial Healthcare System in October 2001. He joined the hospital’s medical staff in July 1985 and he established his private practice in Salinas that same year.

Having served as Chief of Staff in 1996, Dr. Dacus says he sees the greatest challenge in the year ahead as helping to prepare for the survey conducted every three years by the Joint Commission on the Accreditation of Health Care Organizations.

Born and raised in Santa Monica, California, Dr. Dacus had an early interest in science. While studying zoology in college, he decided to pursue medicine as his life’s profession and chose internal medicine because of the diverse challenges it offered.

“As a physician,” says Dr. Dacus, “I have opportunities to help people in ways that few get to do. It is also very rewarding to work with administration and members of the medical staff as we build and strengthen this world class healthcare organization.”

He was a Faculty Instructor with MSU’s Department of Medicine from 1978 to 1980. He also served on the Medical Education Committee and as residency representative to the medical staff for E.W. Sparrow Hospital in Lansing, Michigan, 1979 to 1980. Dr. Dacus established his private practice in the nearby communities of Dewitt and St. Johns in 1981.

Dr. Dacus left Michigan for Missouri in 1982 and served as General Internist with General Leonard Wood Army Hospital until 1985. He was Director of the Special Care Unit in 1983 and Chief of the Internal Medicine Department from 1983 to 1985. Concurrently, he was on the faculty of the University of Oklahoma.

Following a long-held desire to return to his native California, Dr. Dacus came to work and live in Salinas in 1985. He is an associate of the American College of Physicians and a member of the American Medical Association.

Dr. Dacus has two daughters—Angela is in college and Ashley is a full-time wife and mother with two small and busy children. When not practicing medicine or fulfilling various leadership roles at the hospital, he enjoys fly fishing and spending time with his children. 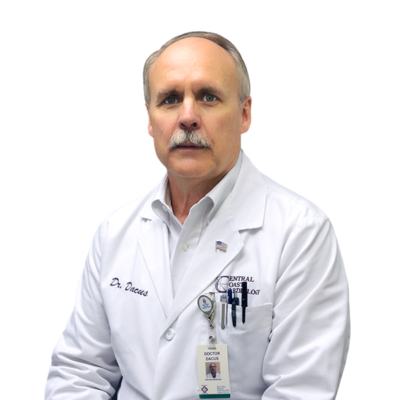