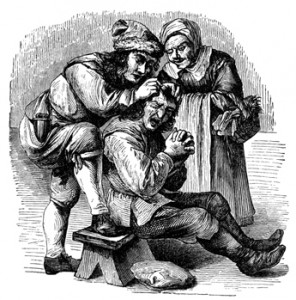 Fall is officially here and Halloween is just around the corner. In honor of this ghoulish time of year, we have decided to take a look at some truly horrific medical practices and treatments from history and today that could have been taken straight from a Stephen King novel.

Bloodletting is thought to have originated in Ancient Egypt and was used as a treatment for various illnesses, ranging from the bubonic plague to a minor headache, until the late 1800s when medical studies discredited the practice. The procedure was performed by one of two methods; the opening of a vein with a sharp object or lancet or by the gruesome process of applying blood sucking leeches to the body. Bloodletting grew in popularity during the time of the Roman Empire, boosted by the teachings of the influential Galen of Pergamum. His writings expanded on Hippocrates’ earlier theory that good health required a perfect balance of the four “humors”- blood, phlegm, yellow bile and black bile. The procedure was used widely in medieval Europe, becoming the standard treatment for an array of medical conditions.

Before the introduction of the screw tourniquet in 1718, amputations almost always ended in the patient’s death. Sailors during this time, many of whom were injured during fierce gun battles on warships, would undergo amputations while awake, without painkillers or anesthetic. Most patients died from the shock induced by the extreme blood loss and intense pain of the procedure. Hygiene and sanitation were extremely poor during this time. Surgeons didn’t understand what caused infections and would use dirty instruments and bandages on their patients. If an amputee were fortunate enough to survive the procedure, they would often end up succumbing to infection in the weeks that followed. 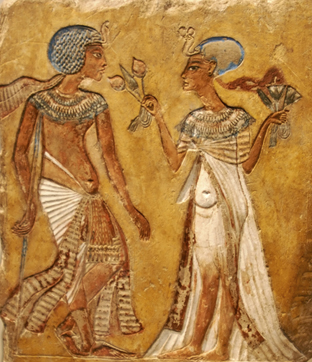 Ancient Egyptian medicine was highly advanced for its time. Egyptian doctors seemed to have a good understanding of the body and would offer fairly sound medical advice for many conditions. Despite this understanding, Egyptian doctors would sometimes prescribe peculiar treatments that most likely did more harm than good to their patients. Various prescriptions were produced using animal dung as the main ingredient. The Egyptians had no concept of the bacteria contained in these medications and likely caused many serious infections through their use. For major flesh wounds, the common prescription was to bandage the area with fresh meat. To treat burns, black mud would be applied immediately, followed on the second day by the application of animal excrement.

The Black Death in Medieval England

The Black Death (bubonic plague) outbreak in Medieval England killed approximately 1.5 million people out of an estimated population of 4 million between 1348 and 1350. Medical knowledge during this time was limited and common treatments included bloodletting, sweating, and forced vomiting. To treat swellings, a common treatment was to apply the flesh of a freshly killed pigeon to the affected area. This would be done by cutting the pigeon open and placing the entire body onto the patient’s wound. Not surprisingly, patients infected with the plague usually died within three days.

With the advent of modern medicine, many of these strange medical practices died out, but there are some surprising treatments still in use today.

Bloodletting, although not used in the same way as throughout history, is used today to treat hemochromatosis or iron overload of the blood.

Maggot therapy, a popular treatment used throughout history to help clean injuries, remove dead flesh and prevent infection, was no longer widely used in medicine due to the effectiveness of antibiotics. Today, with antibiotic resistance becoming a serious problem, maggots are once again being used as a medical therapy. In 2004, the FDA approved the use of maggots in medicine as a valid medical device. Medical studies showed that maggots placed on surgical incisions helped to clear more dead tissue from the sites than the standard procedure in which doctors use a scalpel or scissors to clear the wound.

While ingesting another person’s excrement seems horrific, a state of the art new medical treatment uses Feces-filled pills to treat a gut infection caused by the germ Clostridium difficile. Dr. Thomas Louie, an infectious disease expert from the University of Calgary, has developed a way to place donated stool into a small pill. The affected patient then swallows the pill, where it repopulates the intestines with beneficial bacteria.