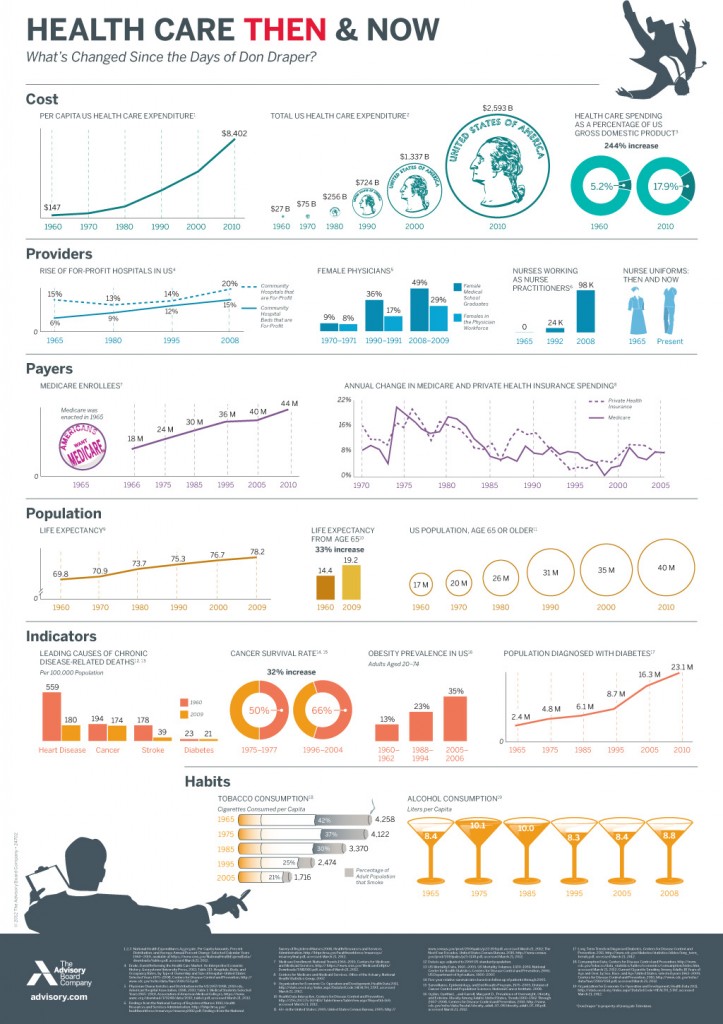 How US Healthcare has Changed since the 1960s

Healthcare has changed significantly since the 1960s. In many ways we are healthier today, partly thanks to advances in healthcare and partly due to lifestyle changes, but unfortunately, in some ways our lifestyles have changed for the worse and new treatments and technologies haven’t always kept pace.

Healthcare Then and Now – Infographic

Advances in Healthcare Since the 1960s

It’s clear that as a nation, we’re spending more than ever on healthcare, but how have these increases in spending affected our health?

In 1960, average life expectancy was 69.8 years. By 2009, that number had increased by almost a decade to 78.2 years. We are living longer thanks to the advances we’ve made in treating serious illnesses such as heart disease, cancer, and stroke. Thanks to new and better preventive care, new drugs, and new treatments, we are living longer and healthier lives than in the 1960s.

In 2005, only 21% of people in the U.S. smoked, in 1965 42% of the population smoked. The landmark ‘Surgeon General’s Report on Smoking and Health’, published in 1964, helped to significantly raise awareness of the dangers of smoking. Ever since the report was published, smoking rates have continued to drop. These decreases in smoking have saved millions of lives and dollars that would have otherwise been spent on treating smoking-related illnesses.

Where have we Gone Wrong?

It’s clear that in terms of treatment and the prevention of certain illnesses, we’re in a much better place than we were in the 1960s, but unfortunately as a nation we’re still failing in significant ways.

It may not seem like it, but today we drink more than we did in the 1960s. In 1965, alcohol consumption was at 8.4 liters per capita, where as in 2008 it was at 8.8 liters. We consume less than during the boozy 70s and 80s, but we’re still consuming a significant amount of alcohol, which isn’t good for our health or our waistlines.

Obesity levels in the U.S. have increased from 13% of the population being classed as obese between 1960-1962, to 35% between 2005-2006. Partly driven by the obesity epidemic, diabetes diagnoses in 2010 were at 23.1 million, compared to just 2.4 million in 1965. Although we exercise more, our diets have gotten significantly worse, with many people relying on fat-filled junk food as a significant part of their diet.

Our healthcare system is in many ways, significantly better than it was in the 1960s, but unfortunately it lags behind many other developed countries. As a nation, we pay more for healthcare than any other country in the world, yet the healthcare we receive was ranked as 37th in overall performance and the U.S. ranked 72nd in overall levels of health in a 2000 World Health Organization report looking at 191 nations.

Why Physicians and Patients are Choosing Personalized Medicine

Today physicians are pressured by the constraints of the current system to see an ever-increasing number of patients each day. Patients are now waiting longer to see their doctor for an appointment that’s shorter than ever before. Physicians no longer have the time to work with their patients to offer thoughtful, preventive care. Patients often don’t know their primary care doctor, seeing different healthcare professionals each time they are sick, including nurse practitioners and physician assistants.

Changes such as these have led many doctors to embrace personalized medicine, a new form of primary care that enables patients to work closely with their doctor, preventing serious illnesses from ever developing. Personalized care helps patients to keep the close patient-doctor relationship that they value, in a system where this is getting harder to maintain.

If you are interested in learning more about personalized care, please visit our webpage for physicians or for patients.