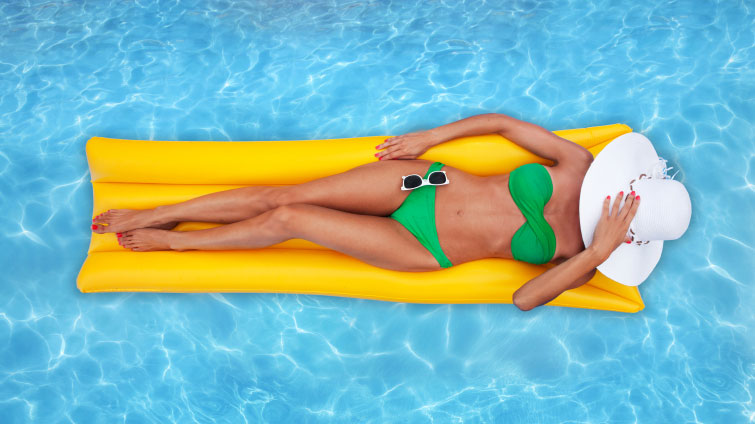 It’s finally summer and warm sunny days mean many of us will be heading to the beach or pool to relax and soak up some rays! For some, tanning is addictive, and now scientists think they may know why.

Researchers at the Massachusetts General Hospital and Harvard Medical School in Boston, MA, studied the effect of UV radiation, one type of radiation emitted by the sun, and its effect on mice. The study findings were published in the journal Cell. During the study, researchers exposed hairless mice to the equivalent of 30 minutes of midday Florida sun every day for 6 weeks.

After 1 week of UV radiation exposure, endorphin levels in the mice had increased. Endorphins affect our bodies in the same way as opioids, such as heroin or morphine. When the mice were later given drugs to block the effect of opioids, they experienced withdrawal symptoms like shaking and tremors. This indicated to researchers that excessive UV exposure may actually be addictive and trigger physical dependence.

Critics of the study suggest that while UV radiation may be addictive for some people, it’s incorrect to compare it to the addictiveness of drugs such as heroin. Dr. David Belin of the University of Cambridge, suggests that if UV radiation is as addictive as the study indicates, millions of people would be tanning every day, leaving their homes and jobs to bathe in the sun instead.

The Most Common Types of Skin Cancer

Tanning may give us a warm and healthy glow, but it can prematurely age skin and cause skin cancer. Approximately 40-50% of Americans living to the age of 65 will have skin cancer at least once. The three most common types of skin cancer diagnosed in the United States today are:

Squamous cell carcinoma: The second most common form of skin cancer, squamous cell carcinoma occurs in the skin’s uppermost layers, the epidermis. This cancer appears as scaly red patches, open sores, elevated growths with a central depression, or warts. It can be deadly if it isn’t removed.

Melanoma: Melanoma is the most dangerous type of skin cancer. Melanomas develop when damaged DNA causes mutations that lead to the development of malignant tumors. Melanomas can develop from moles and are usually black or brown, but they can also be skin-colored, pink, red, purple, blue or white. If caught early, melanomas can often be treated successfully, but they can be deadly if missed.

How to Stay Safe in the Sun

When outside in the sun this summer, use common sense and protect your skin with clothing, hats, and sunscreen. Try to avoid being outside in the sun between 10am to 4pm, as this is when the sun’s rays are strongest. Sunny days can be enjoyed but it’s more important to protect your skin than to get a tan! Make sure to always cover up and limit the amount of time you spend in direct sunlight.