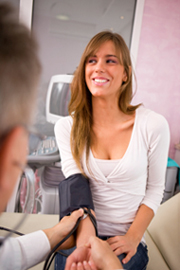 The Hype About Hypertension

The study also discovered that over the course of the evaluation, more participants became obese. In 1995, “11 percent were obese. On follow-up five years later, that number had doubled to 22 percent. By 2008, more than one-third (37 percent) were obese. Another 30 percent were overweight, but not obese. This means 67 percent of all of the young adults were above a normal weight.”

Obesity and hypertension can cause problems like diabetes risk, kidney disease and arthritis, which is why young adults should begin healthy lifestyle habits early on. The concierge medicine model, like that designed by SignatureMD, allows doctors to thoroughly evaluate patients for issues like high blood pressure, and prescribe manageable and healthy wellness plans to get patients feeling and living at full capacity.