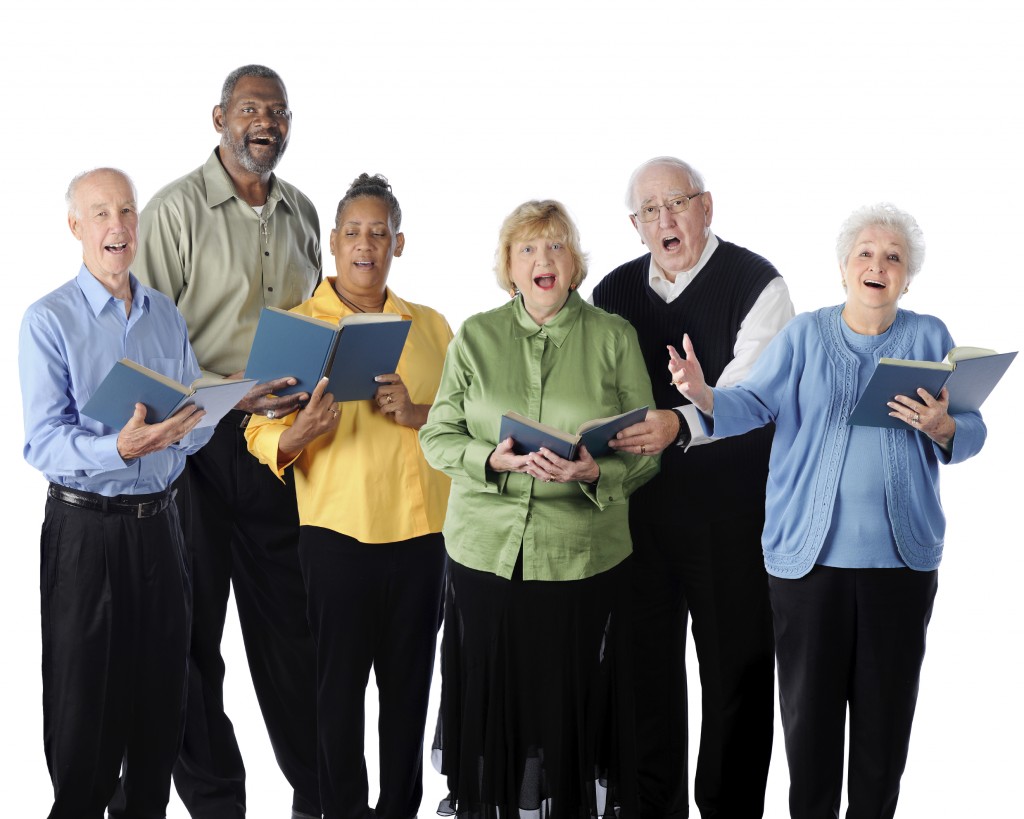 Listening to endless loops of Christmas carols while shopping this time of year in department stores is enormously irritating (at least for some of us). But according to a new study, belting out a few holiday favorites this time of year can be therapeutic – and especially for those suffering from early dementia, including Alzheimer’s.

Writing in the Journal of Alzheimer’s Disease, researchers led by Dr. Teppo Särkämö at University of Helsinki, Finland have revealed that caregiver-implemented musical leisure activities, particularly singing, are cognitively and emotionally beneficial especially in the early stages of dementia. The findings could help improve dementia care and better target the use of music in different stages of dementia.

Initially, the researchers recruited 89 pairs of “significant others” (called “dyads” in research parlance) with mild to moderate dementia and their caregivers to a single-blind randomized controlled trial in which they received a 10-week music coaching intervention involving either regular singing or listening to familiar songs or standard care.

Previously, the results from a 9-month longitudinal follow-up with neuropsychological tests and mood questionnaires showed that the musical activities were able to enhance various cognitive skills, such as working memory, executive functions, and orientation, and alleviate depression compared to standard care.

The focus of the researchers was to uncover how different clinical and demographic factors influence the specific cognitive and emotional effects of the two music interventions and, thereby, determine who benefits most from music. Looking at the backgrounds of the dementia patients, the researchers systematically evaluated the impact of dementia severity, etiology, age, care situation, and previous musical hobbies on the efficacy of the music interventions.

Importantly, the musical background of the persons with dementia (whether they had sung or played an instrument before) did not influence the efficacy of the music interventions.

“Given the increasing global prevalence and burden of dementia and the limited resources in public health care for persons with dementia and their family caregivers, it is important to find alternative ways to maintain and stimulate cognitive, emotional, and social well-being in this population. Our findings suggest that musical leisure activities could be easily applied and widely used in dementia care and rehabilitation. Especially stimulating and engaging activities, such as singing, seem to be very promising for maintaining memory functioning in the early stages of dementia,” Särkämö concludes.

The Finnish study reinforced earlier research from Juntendo University School of Medicine in Japan on the elderly (mean age: 83 years) suffering from moderate or severe dementia. This study found that patients receiving weekly music therapy group maintained their physical and mental states during the two-year period better than the non-music therapy group. Even the elderly with moderate or severe dementia were able to participate in the group music therapy, and results suggested that enjoying singing and playing musical instruments in a concert also was effective in preventing cardiac and cerebral diseases.

So, what is it about music in general and singing in specific that improve cognition, produce a calming yet energizing effect, and spur other health benefits? The short answer is, researchers aren’t sure.

A very preliminary investigation suggesting that our heart rates may sync up during group singing could also explain why singing together sometimes feels like a guided group meditation. Study after study has found that singing relieves anxiety and contributes to quality of life. Dr. Julene K. Johnson, a researcher who has focused on older singers, recently began a five-year study to examine group singing as an affordable method to improve the health and well-being of older adults.

When you sing, musical vibrations move through you, altering your physical and emotional landscape. Group singing, for those who have done it, can be the most exhilarating and transformative of all.

The benefits of singing regularly seem to be cumulative, which may be the reason for a dramatic surge in amateur singing groups or chorales. According to Chorus America, 32.5 million adults sing in choirs, up by almost 10 million over the past six years.

“It turns out you don’t even have to be a good singer to reap the rewards.  According to one 2005 study, group singing can produce satisfying and therapeutic sensations even when the sound produced by the vocal instrument is of mediocre quality,” wrote Stacy Horn in Time magazine. Horn is the founder of the social network Echo and the author of “Imperfect Harmony: Finding Happiness Singing With Others.”

“Group singing is cheaper than therapy, healthier than drinking, and certainly more fun than working out.  It is the one thing in life where feeling better is pretty much guaranteed,” added Horn.  “Even if you walked into rehearsal exhausted and depressed, by the end of the night you’ll walk out high as a kite on endorphins and good will.