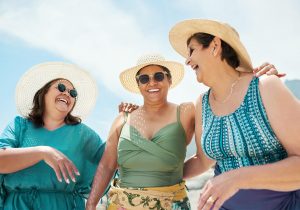 The spread of ovarian cancer

Ovarian cancer is very rare—affecting only about 1.3% of women at some point in their lives—but it’s still far too common for the women and families who face it and fight it each day. Ovarian cancer involves much more than the ovaries. In fact, ovarian cancer is actually a group of diseases that affects the ovaries and fallopian tubes, along with the tissue lining the abdominal wall known as the primary peritoneum. Combined, some form of ovarian cancer will affect 20,000 women in the United States this year alone.

Common kinds of an uncommon cancer

Even though people may be silent about the disease, the symptoms luckily aren’t. However, they’re rather subtle and often mistaken for other harmless conditions. As a result, the signs are frequently ignored or thought to be the typical signs of aging. No wonder ovarian cancer often goes undetected until it’s advanced to a later stage. If you experience any of the following ovarian cancer symptoms, visit with your SignatureMD-affiliated doctor as quickly as possible and consider ovarian cancer testing. The most common ovarian cancer symptoms include:

With ovarian cancer, testing is the key to detection. According to the American Cancer Association, there is a 94% ovarian cancer survival rate when it’s detected and treated in the earliest stages—yet only 20% of ovarian cancer cases are diagnosed early on. This is why it’s vital to take even the slightest symptom seriously and schedule ovarian cancer testing right away. These most common tests include a pelvic exam, an ultrasound, and a blood test. If you’re diagnosed with ovarian cancer, there are several effective options for treatment. Rest assured that your SignatureMD-affiliated doctor will help you find the treatment that’s right for you. Sometimes, a combination of treatments is recommended. The main treatment is usually surgery to remove the ovary and surrounding tissue affected by cancer. Sometimes, women choose to remove both ovaries, the uterus, and the fallopian tubes as a preventative measure to reduce the risk of recurrence. The other primary treatment is chemotherapy, which uses targeted medicines to shrink or kill cancer cells.

The prognosis for prevention

During Ovarian Cancer Awareness Month, spreading the word about prevention is a priority. Fortunately, studies have shown that certain factors can help reduce your risk for developing ovarian cancer, such as:

During Ovarian Cancer Awareness Month, start talking about ovarian cancer to spread the word to women everywhere and save the lives of the ladies you love.