Dr. Johnson has partnered with SignatureMD to ensure that you receive the finest in personalized care. As a program member, you’ll experience a new approach, where Dr. Johnson will dedicate the time you need to help you live your healthiest life.

Neal D. Johnson, MD has been practicing family medicine in Austin, TX since 1990.

Dr. Johnson was born and graduated high school in San Antonio, living in several states in-between those times. He received his Bachelor of Arts from the University of Texas at Austin in 1977. He went on to attend the Baylor College of Medicine in Houston, where he obtained his doctor of medicine degree in 1982.

After graduating from medical school, he completed his family practice residency with the U.S. Army at Fort Benning, Georgia. He worked four years in the Army serving in Germany at medical clinics and Nuremberg hospital before returning to Austin to start his private practice.

Throughout his medical career he has been recognized for his quality of care and friendly manner, including being listed in the Consumers’ Research Council of America’s “Guide to Top Family Doctors.” Dr. Johnson has been recognized as one of Austin’s top doctors on many separate occasions, including by the publications DigitalCity.com, and Castle Connolly Medical Ltd.

Dr. Johnson is married and the father of three wonderful grown/adult children. 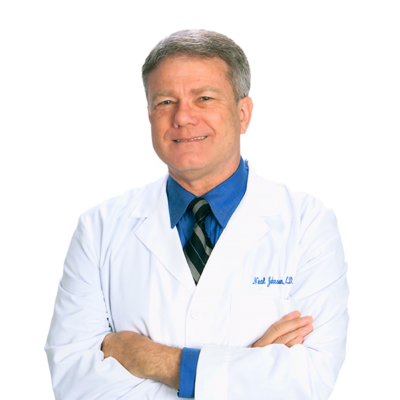 I have been going to Dr. Johnson for 11years. The staff is always friendly and Dr. Johnson is always available any time… read more

First visit and was impressed. He spent the time to go over my history and give me good suggestions on things to try… read more

They saved my health five years ago when other doctors just shrugged or had very scary inaccurate information. I will… read more

My health has been improving since I've been seeing Dr J. I always feel comfortable and he explains everything to me… read more

I've read allot of complaints about the lab work Doctor Johnson sends out but I for one am beyond thankful for it. Just… read more

I have been a patient at Dr. Johnson's office for around 3 years. Yes, they have done thorough lab testing at each of… read more

So far so good. These people are nice. Doc is good.

I love this office and Dr. Johnson. He is very knowledgeable and been able to help with my many ailments since… read more

I have been going to Dr. Johnson for more than 20 years. I have also used the nutritionist in the office. Dr. Johnson… read more